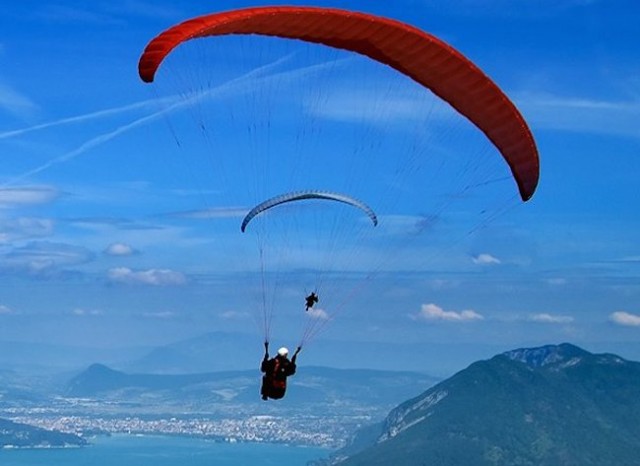 What Red Bull and New Zealand can do, the Okanagan can do better.

Or so a local adventure company and video crew aim to prove on Thursday.

Ayn Lexi of Okanagan Outdoor Adventures says a crew will be filming an "18 in 1" adventure video around Kelowna in response to Red Bull’s recent New Zealand "5 in 1" video. The numbers refer to the number of adventures that can be done in a single day, transitioning straight from one to another.

The group will start off with a helicopter flight and landing at the paragliding launch site on Blue Grouse Mountain, where a stuntman will do a tandem flight, landing at Okanagan Lake to start into some water sports.

Okanagan Outdoor Adventures partnered with Land Sea Air Canada and cameraman Jason Kenzie, aka A Photo Warrior, to produce the video promoting the many adventures the Okanagan has to offer.

“What prompted this video was when I saw one produced by Red Bull and commissioned by tourism New Zealand. They were showing that you can do their five big adventures all in one day, and I thought we can totally beat that," said Lexi.

"So, we will on Thursday.  In fact, we’re going to crush it! We have arranged for 18 adventures all to be shot on Thursday, with each transitioning from one to another, just like the Red Bull video."

Moving from mountain to lake, the activities will include wakeboarding, jet skiing, sailing, fly boarding, parasailing and a jet boat ride, ziplining, a leap off an 80-foot pole, mountain biking, a Harley, pedicab and a sidecar ride, kayaking, stand-up paddle boarding and a wine tour.

“It’s going to be an epic day, and it will be a great showcase for some of the adventures we have locally," said Lexi.

When complete, the video will be posted on the company’s website, www.okanaganoutdooradventures.com.